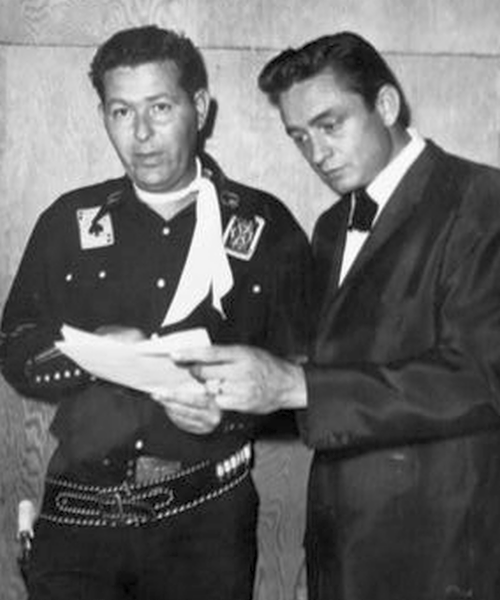 Black Jack Wayne (left) and Johnny Cash, together in their show finery. Making an assumption here, but we’re guessing that John R. Cash is appearing on Black Jack’s weekly program on KTVU (Channel 2) in Oakland.

Johnny may have also been promoting an upcoming appearance at Jack’s fabled Garden of Allah in Niles, probably in the late 1950s or early 1960s when the Garden was a hotbed for live Country and Western music and featured many of the top names in the business, including Del Reeves, the Maddox Brothers & Rose, Brenda Lee, Skeets McDonald, and the Everly Brothers.

Black Jack Wayne (or, often, “Blackjack”) was born Jack Thurman Shults in Oklahoma on February 8, 1923. His family migrated to the San Francisco Bay Area in the late 1930s as part of the great “Okie Exodus” from the Cotton Belt of Oklahoma, Texas and Arkansas.

He also recorded and produced several songs on the San Francisco-based Cavalier label in the mid-1950s, notably backing the legendary Patsy Montana with his Bar 10 Boys on two Cavalier releases in 1954. (Over the years, the Bar 10 Boys would be known variously as The Bar 10 Ranch Boys, The Rattlesnake Ramblers, or The Rovin’ Gamblers.)

Later in life, he “retired” to Fort Bragg, where he captained a party boat named Cavalier, which he chartered for deep-sea fishing trips out of Noyo Harbor. He passed away on June 30, 1999, in Fort Bragg at the age of 76.

His wife, Peggy Ann Shults, to whom he was married for more than 57 years — and who was also a prolific songwriter in her own right — died in August 2003 at age 79 in Fort Bragg. She was born Marjorie Anne McCullough in 1923 in Hibbing, Minn., the same town Bob Dylan grew up in. Peggy and Jack were married in June 1942 in Reno, Nevada.

Jack’s younger brother, Charles Henderson Shults, performed as Chuck Wayne — both solo and quite often with his brother’s band. In the mid-1970s, he fronted his own band, Chuck Wayne & The Country Cut-Ups, which also featured his wife, Johnnie Ruth. Chuck passed away in 2013 at the age of 85.

The Garden of Allah was located on State Highway 9 (also known back then as the Hayward-Niles Highway; now Mission Boulevard), about a mile up the road from the Niles district in what is now Fremont, near what is now the Decoto district of Union City.

Located on a five-acre site, it had been a popular resort and dancehall of varying repute since the 1920s, described as having “the best dance floor in this part of the state.” Black Jack and Chuck Wayne purchased the facility in December 1956 after having rented it for live concerts and dances for the previous two years.

The Garden was gutted by an accidental fire in the early hours of January 1, 1964, following a New Year’s Eve celebration. The vacant shell of the building remained in place for several years before it was eventually razed. 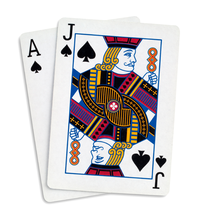 Some discography information in this article courtesy of 45cat.com.

Do you have more information about Black Jack Wayne or Chuck Wayne? Are you a member of the Shults/Wayne family? Have a favorite memory or recollection about them? If so, we’d appreciate hearing from you! Please add your comment down yonder below…

Holler at us! Cancel reply