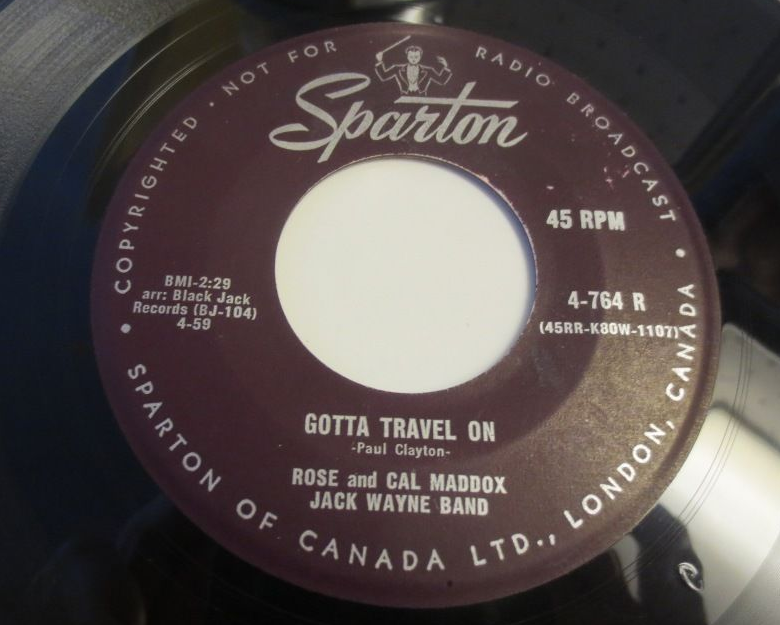 Just added to the KWPX Cowpoke Corral of Country Classics is the 1959 recording of “Gotta Travel On” by local legends Rose and Cal Maddox, backed by the fabulous Black Jack Wayne Band. Rose and Cal are part of the Alabama-born, Modesto-based Maddox Brothers & Rose, known far and wide as “The Most Colorful Hillbilly Band in America.” The family band, which can rightfully claim credit as the originators of the Rockabilly style, got its start on Modesto’s famed KTRB Radio back in 1937. 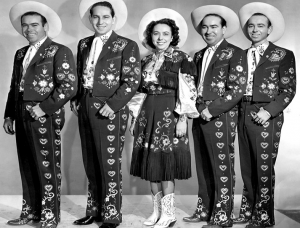 The Maddox Brothers and Rose (photo, right) stuck together until 1956, when Cal and Rose set out on their own, touring and releasing several records as a duo. Rose, who died in 1998, also worked as a solo act for many years, reaching #3 on Billboard’s Hot Country chart in 1962 with “Sing A Little Song Of Heartache.”

She recorded several tunes with Buck Owens, two of which — “Mental Cruelty” and “Loose Talk” — were Top Ten hits in 1961. Her life story was immortalized in Jonny Whiteside’s award-winning biography, “Ramblin’ Rose: The Life and Career of Rose Maddox.”

Black Jack Wayne, born in Oklahoma but raised in the Bay Area, was a quintessential Western Music entrepreneur — singer, songwriter, bandleader, record label owner, radio disc jockey, TV host, packager of live concerts featuring himself and other Country stars of the day, and operator of his own nightclub (with his brother, Chuck Wayne), the Garden of Allah on Mission Boulevard in Fremont’s Niles District.